Well, it’s an observable swelling that comes from a fluid accumulation in body tissues.

And, edema most commonly occurs in the feet and legs, where it’s referred to as peripheral edema.

The swelling is the result of the accumulation of excess fluid under the skin in the spaces within the tissues. We already have fluid there, the interstitial fluid, but this is more than usual.

Other parts of the body, such as the face and hands, can also be affected.

As many of us know after a long day of shopping (or walking around an art museum, or just standing on our feet) – swelling or edema around the ankles etc., can happen. And, it can happen to anyone.

At night, the fluid tends to drain from the legs so that foot/ankle edema is usually less obvious when you get up in the morning.

But, is it serious?

Well, depending on how extreme it is and how long it’s been there… it could be!

Most of us will have experienced edema in our everyday life.

We’ll notice that our rings don’t fit or our ankles are a little puffy. And if you’ve had a little too much alcohol, you’ll see it in the morning – right before your eyes – in that puffy face of yours.

There are 2 main types of edema:

Edema has been described as the result of venous ulceration, which is often caused by an increase in tissue pressure (increased fluid within the tissue) because of increased capillary permeability.

Some Causes of Edema 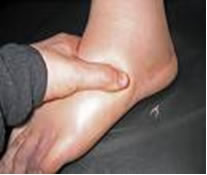 Certainly, there can be many causes for edema. Some are fleeting as I mentioned above, while others are much more serious.

If you have edema (or any swelling) and don’t know the cause, it’s important that you see your doctor. You’ll feel better to know that nothing is wrong… or, if there is, you’ll want to know that too.

Edema of the ankles and lower legs can be mild and passing or, it can accompany other conditions, including obesity, diseased leg veins, kidney disease, cirrhosis of the liver, anemia, and severe malnutrition. It might also be a characteristic of congestive heart failure.

And, there could be other factors that might contribute to its onset, including:

One symptom is when, initially, the feet and legs will appear swollen as the day progresses, but after a period of time, the swelling will set in first thing in the morning and continue to worsen throughout the day.

There’s probably a certain amount of edema that we can live with when it’s found to not be a problem.

But, it can become serious – particularly if the edema is advanced and has been around for a while – it might cause pitting (as mentioned above, when you press on the swollen area for a few seconds, you will notice an indentation in that area that continues long after the finger-pressure is removed). Continued swelling can cause skin ulcerations.

Over time, other symptoms could develop as a result of the fluid retention and the pressure on the tissue and the body:

Okay, we know that food tastes better with salt and that’s why so many products and restaurants load their food up with it.

It’s usually in vast quantities in processed foods. Even ‘health foods’ can have lots and lots of salt (it’s a pity that salt, sugar and fat are things that make food taste better and are overused in our culture).

Almost anything can be okay in moderation – but we’re way over the top with these foods.

The body’s balance of salt is usually well-regulated. A normal person can consume relatively small or large quantities of salt in the diet (although extremes are best avoided) without concern for developing salt depletion or retention.

If someone has a kidney disease that impairs the function of the kidneys – the ability to excrete salt in the urine is limited.

In some conditions, the amount of salt in the body increases, and this may cause a person to retain water and develop edema.

Treatment of edema with prescription medications is limited to the use of diuretics, commonly referred to as “water pills.”

Commonly, treatment consists of managing the underlying condition, which may include: inadequate nutrition; liver, heart, and kidney disease; or obstruction of blood or lymph flow. In some cases, a salt-restricted diet may be recommended.

If the edema is localized and due to a strain or trauma, people report have gotten good results from homeopathic products like ‘Traumeel’ & ‘Topricene’. I keep both of them at hand.

What Can Reflexology Do?

The fluid that builds up to become edema is normally brought back to the heart via the lymphatic system.

Unlike the circulatory system which has a pump (the heart), the lymphatic system relies on movements of the body to help drain it’s fluids.

Since there are no little pumps at the ends of our fingers and toes, the gentle movements of our reflexology techniques (thumb and finger-walking) at the extremities, supports the natural processes of the whole body.

Once again, I’ll remind you that reflexologists don’t treat, diagnose or prescribe.

And, I’m not even interested specifically in the movement of local fluids. My focus is on the whole body, the organs and organ systems.

However beware, there might be some edemic conditions that don’t need this or are too weak to benefit.

Yes – that’s right, if the condition is not diagnosed – or even if it is diagnosed – and it’s advanced edema (pitted edema is advanced) – you must always check first with the doctor before working.

Because, unless you are a doctor, you don’t know if it will help or will be too much fluid movement for an obviously compromised system to handle.

No guessing here – remember, someone who is sick will have a medical team. It’s in everyone’s best interest to check with the medical team. They won’t mind or be shocked – it’s what they all do.

Now my guess is almost always that reflexology will help.

But, if someone is very ill, it’s the MD on the team that must know and approve any work before you can be sure about proceeding. They know the whole story about their patient’s health and they’ll base their recommendations on the big picture.

You and even the person with the edema may not understand or even know all the implications of their condition.

So it’s easier than you thought – and there’s no guess work – just make the call to inform the team and get the okay for proceeding with reflexology.

Easy as pie (is that a prairie expression?).

A little puffiness is a pretty common sight. In a healthy individual it doesn’t represent a problem unless it’s gone on for too long, has impeded movement or is of concern.

And, yes – there are reflexes to the immune system.

Don’t forget the spleen (the largest lymphoid in the body and thymus reflexes too – both are important).