As kids are going back to school and the transition into autumn occurs, it’s more important than ever to take care of our bodies and support their natural defense systems.

One part of the body that supports our health in a big way is a little gland found in the center of the chest area called the thymus gland.

Interestingly enough, the word thymus is derived from the Greek thymos…which is difficult to translatable into modern terms but was used to denoted a life force, soul and feeling or sensibility. It’s also the word used to reference “recognition” as a human desire. 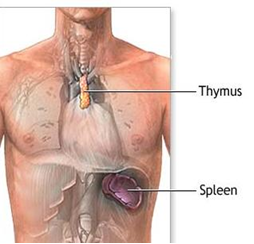 The thymus gland is found in the thorax behind the sternum and in the anterior mediastinum.

It gradually enlarges during childhood but after puberty it undergoes a process of involution resulting in a reduction in the functioning mass of the gland.

The thymus gland is arranged into an outer, more cellular, cortex and an inner, less cellular, medulla. Immature lymphoid cells enter the cortex proliferate, mature and pass on to the medulla. From the medulla mature T lymphocytes enter the circulation.

The thymus is a gland that produces many of those disease-fighting foot soldiers — the white blood cells that come to your defense against many types of infections.

And the thymus produces hormones that enhance your immune function overall. So if your thymus isn’t working as it should, your body may have trouble fighting off infection.

The thymus is critically required for the maturation of the vast majority of T cells. Once matured, T cells leave the thymus and patrol the body. They protect against foreign invaders by making immune responses that are initiated via T cell receptors expressed by these T cells.

T cells of thymus: T cells belong to a group of white blood cells known as lymphocytes, and play a central role in cell-mediated immunity. They can be distinguished from other lymphocyte types, such as B cells and natural killer cells by the presence of a special receptor on their cell surface called T cell receptors

The thymus can be implicated in a wide variety of disorders, especially ones that involve the immune system.

Thymoma (cancer of the thymus): Thymus cancers are uncommon cancers that start in the thymus.

Thymoma is a disease in which cancerous cells are found in the tissues of the thymus. People who have myasthenia gravis are at increased risk of getting thymoma. Those diagnosed with thymoma often have other diseases, including myasthenia gravis, polymyositis, lupus erythematosus etc.

Symptoms: People with thymoma often have other diseases of their immune system, most commonly myasthenia gravis. Myasthenia gravis symptoms include muscle weakness because antibodies block the chemical signal connecting the nerve and muscle

Treatment: Surgery to remove the tumor is the most common treatment for malignant thymoma. Radiation also may be used alone or in addition to surgery, especially in patients with stage 2 thymoma.

Treatment: In severe cases where immune system function is absent, bone marrow transplantation is required. Many newborns with this deletion will benefit from early intervention to help with muscle strength, mental stimulation, and speech problems.

In the past, a count of T cells had been used as a marker for immune function in HIV and AIDS. (It did not prove to be an accurate measure for overall health as first thought).

Home remedies that others have suggested:

What can reflexology do?

Time and time again, my own experiences and those of my clients indicate that our gentle yet powerful techniques of alternating thumb and finger “walking techniques applied to the feet, hands, face and ears is like a tonic for the sole (and with the thymus connection also to the soul).

Not only do we have these immune system and gland reflexes at our fingertips, the support for circulation could additionally be a boon for the flows of the immune system.

For any serious health condition it is advised to consult a doctor first. Since reflexology will support circulation – if there is any medical effort to suppress it – reflexology may not be advised.

But how often do we reflexologists take time to sit with, or detail and support the reflex to the thymus gland?

Would that change if you knew how important it was to the immune system and it effectiveness?

First let’s find its location – I place the reflex for the thymus bilaterally on the heads of the first metatarsals, medial and plantar aspects, at the level of the MPJ (metatarso-phalangeal-joint). I never apply deep pressure into the joint area but rather angle towards the top of the metatarsal head.

Now, the thymus gland reflex is an important part of the family of immune system reflexes which I refer to as one of my “go to” systems for almost all issues affecting the body.

That the thymus was named with the Greek word that was used to express “the seat of courage” or the “abode of the soul” may not be just coincidental.

In every reflexology session where I provide additional immune system reflex support – I pay special attention to the thymus reflexes.

And, if that weren’t enough, I can also locate the 4th chakra (that yummy “heart” chakra) on the feet at the level of the thymus reflex.

This brings in a whole other level of support… as I sit with and contemplate this organ reflex.

I will ask myself quietly, or I will ask my client – what do you need to feel that you are supported (support that’s on a “soulular level)?

I will also link the thymus reflex to the other immune organ and system reflex points – the spleen reflex and the general lymph reflex areas (both axillary and groin lymph reflexes).

If you spend some quality reflex time at the “center of the soul – the thymus reflex – you can support your clients health through their own healing processes. The potential for even greater success is the ultimate goal.

Here’s to your good reflexology health!